Important in the process of establishing a solid foundation for a hopeful future is also the realization that we must work on a sustainable future! A sustainable, resilient future where we don’t exploit creation, but change our hearts, habits and expectations and care for creation in every part of our lives. A major problem that faces the people of Malawi is the lack of food security. Families often do not have enough (nutritious) food to feed themselves. But areas such as shelter and energy are also important to get the focus on evironment-friendly sustainability! That is why we see this as an important part and we want to guide, convince and motivate people to design their environment in such a way that they will be sustainable and self-sufficient in areas such as (nutritious) food, energy, shelter and other material and non-material needs. At the same time, we also encourage people to share honestly with others when they have more than enough.

In Malawi, the majority (85%) of the people depend on small-scale farming for their livelihood. This means that if they don’t have a harvest… they don’t eat. In the past, Malawi’s wildlife was full of diversity. The people had access to hundreds of different plants and animal foods found in the forests, lakes and fields around them. Many of the older people, but even people born before 1980 can tell you about this. When the now so-called traditional agriculture took over, it discouraged the use of this natural wealth and instead exchanged this diversity for only a handful of crops, called monoculture, in Malawi mainly maize. This limited number of crops has led to many problems such as malnutrition, but also annual food shortages due to crop failures.

That’s why we encourage people to use agro-ecological farming systems. We teach people to design their gardens with a plan. Where possible, gardens are moved closer to their homes and water resources. Crops are grown in a way that has the diversity, stability and resilience of a natural ecosystem. We work with creation instead of against it with the aim of providing them with as many necessities as possible. Such as making the most efficient use of space, natural laws and elements such as sun, wind and rain and creating closed cycles as much as possible, while also paying a lot of attention to improving the quality of the soil, biodiversity and seed propagation.

A well-functioning soil life and ecosystem are very important for a sustainable future in agriculture. The costs for this way of farming are low, because as much as possible natural input is used. This also means that it can be realized for everyone, rich and poor.

By imitating natural ecosystems, you also respond to other challenges such as drought. The diversity of crops prevents malnutrition (1/3 of the population of Malawi is malnourished) and a possible crop failure of one or more crops no longer has a major impact. We believe this approach to agriculture can prevent food shortages and protect the landscapes of local communities.

In Malawi, part of the population lives in poor-quality mud houses with plastic and grass roofs. These houses are often not waterproof and a lot of rainfall creates a danger of collapse with all the consequences that entails and health problems for the residents due to the leaking. Many people also live in houses with corrugated iron and are built of cement and bricks. These buildings provide solutions when it rains, but the hot sun on the roof makes many houses too hot to stay in. Cement, on the other hand, is also expensive to purchase and not environmentally friendly. In terms of building, we promote homes that are ecological and sustainable! We train in designing and building practical and comfortable houses that are as pleasant and functional as possible in a tropical climate! We do this by using existing, reliable and ancient building techniques, made from natural materials such as loam, wood, and roofs are made of thatch. Of course we also walk the talk ourselves so our own buildings are also built in this way and serve as an example.

The vast majority of people use wood or charcoal for cooking. 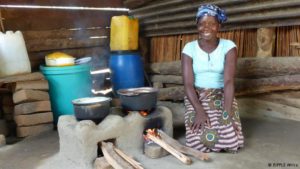 Deforestation (87% of the forests have been cleared since 1980) is therefore a major problem and women and children often spend several hours a day collecting wood. Smoke inhalation indoors while cooking can cause health problems for many people, possibly resulting in early death.

We are mainly active in the energy field by promoting efficient cooking appliances and at the same time we encourage wood production so that wood will become widely available again.

We want to guide and support people to become more self-sufficient in these areas by:

We invest in examples to convince and encourage people. If someone is not enthusiastic himself, it has no use to invest. To inspire people and make them enthusiastic we demonstrate everything on site. In this way we can show what it looks like and what is possible. We invest in anyone interested. We also have a special focus on the youth at the various schools or various other groups of young people!. We invest in them by providing both theoretical and practical education. We organize excursions and field trips to our own demonstration site where we motivate, encourage and coach them at an early stage in life. Educational group activities in combination with the use of our big natural playground we playfully invest in their lives 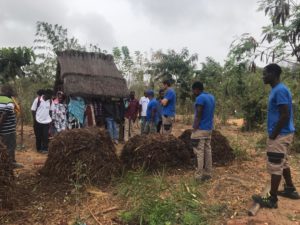 For the people who are enthusiastic, we offer challenging, practical and theoretical training in our training center in order to impart the necessary knowledge.

After finishing the training to become more self-sufficient we offer people unlimited support and coaching through advice and the provision of information.